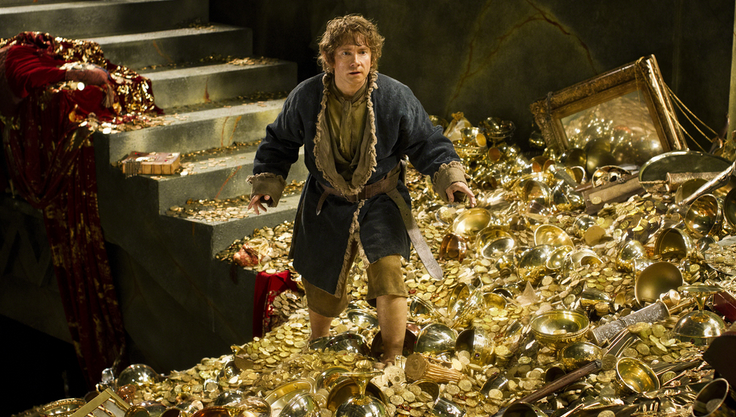 How Much is the Lord of the Rings Franchise Worth?

Since it was first published, in 1957, The Lord of the Rings has given a solid stream of income for author J.R.R. Tokien and his heirs. And when Peter Jackson fulfilled his life-long dream to see a filmed version of the cult novel and rocked the box office with over USD 3 billion, the books sales saw a new revival. And from there, video games, action figures and other merchandise exploded around the world. How much is the Lord of the Rings franchise worth? To ascertain anywhere near a close estimate, all of the limbs of the entertainment branch of the LOTR tree must be analyzed. Here they are:

Before  Tolkien’s death in 1976, his heir The Tolkien Estate, ran by the author’s son and literary heir, Christopher Tolkien until his death two months ago at age 95, is still making money hand over fist. The Telegraph estimates that book sales alone for 2001 were up to 50 million pounds worldwide. That’s before they sat down with Houghton Mifflin to discuss further rights stemming from future book sales. In 2001, it was reported that Christopher was quite upset that the family would not be making cash directly from the movie deals.  It’s also been reportsedthat John Ronald Reuel Tolkien Tolkien was worth 500 million pounds when he died in 1978. His son Christopher, who oversees the family business of wheeling and dealing agreements about his Dad’s masterpiece, and also edits and annotates the notes and stories his famous father left behind, Christopher, who is not a fan of the movies, perhaps because they didn’t directly make him a dime, balked at some of the merchandising, and successfully stopped a Lord of the Rings slot machine that was developed by Warner Brothers.

Houghton Mifflin, the official U.S. publisher of Tolkien’s work for more than 60 years, has a lot to smile about. They took a risk and had paid a hefty sum to acquire the rights to the movie tie-in volumes. The company had made lots of cash from JRR Tolkien’s work with Lord of the Rings movies in 2001,2002, and 2003 and then expanding The Hobbit into a trilogy over ten years later. There were opportunities for endless publications that explained and highlighted the settings and characters of “The Nerd Bible”, or Lord of the Rings Trilogy. Online MBAaverages the figure of new and used book sales to be $2.25 billion.

It’s not a good idea to mess with the Tolkien’s literature, as one Russian author Kirill Eskovm found out when he was threatened by the estate because he wrote his version of Lord of the Rings, The Last Ringbearer, giving fans a glimpse of how the story would be told if Orcs were the good guys. This book could not be released in English because the Tolkien estate does not approve, but fans everywhere have downloaded underground translated copies.

Despite purists who are upset about the deletion of Tom Bombadil, fans who never even heard of the book were won over by Peter Jackson’s award winning film trilogy. According to The Minute MBA, the movies are the sixth highest grossing movie franchise of all time, making close to $4 billion.

In 1982 a little computer game called The Hobbit was introduced. It was popular with die hard LOTR fans, but did not strike gold. The story of a cute little hobbit with a bunch of grumpy dwarves did not have much appeal for anyone, except for those who still have their “Frodo Lives” tee shirt from their college days in the 1960s, and kids who had seen the cartoon version of the movie. Electronic Arts (EA), paired some action packed and rather violent adventure games based more heavily on the movie plots than literary cannon. One game ruled them all, from PS2 to Xbox and Gameboy.

Not to be outdone, the Tolkien estate licensed their own game with Universal Interactive, closely based on the plot of the first book,  The Fellowship of the Ring. As it was more for hard core book canon fans than die hard gamers, the game based on the second book never made it to the shelves. Another video game based on the Hobbit was released by Vivaldi Universal and Sierra, but as the movies had not yet brought Thorin and Company back to life in cinematic glory, it didn’t break any sales records. With franchises, timing is everything. If they had waited ten years and made Thorin’s avatar look like Richard Armitage, who played the lead dwarf in the films, it would have flown off the shelves.

The Tolkien estate finally gave in to EA games to use book material that was not included in the movie so that the characters and plot could be more richly developed. Because of this, there are so many games that sprang from the movie and films, and estimate of sales would be impossible. If EA games is worth 34 billion dollars then it can be assumed that part of it was made from sales of The Lord of the Rings games like The Battle for Middle Earth series. The Lord of the Rings: Conquest was the last game to be released by EA and then Warner Brother’s bought the license to turn out more games before the release of the blockbuster Hobbit movie trilogy.

Action figures, Legos, jewelry, drink cups, and even Hobbit doll houses rode the coattails of this massive mix of literature and film adaptations, so the entire worth of the Lord of the Rings franchise grows with every new movie release, including extended video editions of the theater versions, with commentary from the cast and crew plus deleted scenes. Fans are clamoring for Peter Jackson to finish the job and make the Silmarillion, which if this happens, will give the other stories a new revival.

The big winners in this endeavor are Peter Jackson and the movie cast, Houghton Mifflin Publishing, and of course the Tolkien estate, even if they dispute the fact. New Zealand has also benefitted from tourism resulting from the film’s location, although much of the filming, particularly for the later films, was done on green screen. So in the end it can be said that the entire Lord of the Rings Franchise is more valuable than all of the Mithril in the Mines of Moria.

All tolled?  A specific number is extremely hard to guess but an estimate of $10-$15 billion is not entirely out of the question.